Latin Name
Periplaneta fuliginosa
Appearance
What do they look like? 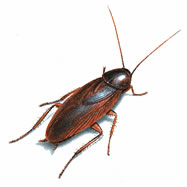 Length: Adults can reach 38 mm long.
Wings: These strong fliers have wings that extend beyond their body.
Color: Adults have a shiny appearance and are uniformly a black, mahogany color. The later nymphs are similar in color as adults, but the early nymphal stages have a whitish colored stripe on their thorax and on the tips their antennae. These roaches are often found in leaf litter and mulch, so their coloration helps to hide or camouflage them against predators.

How Did I Get Smokybrown Cockroaches?

Common Attractors
These cockroaches usually are found in basements and the ground floor levels. Some common attractors are:

How Do They Get Inside?
The pests crawl inside through small holes in siding or home foundations and also will fly through open doors and windows.

How Serious Are Smokybrown Cockroaches?

These insects become a pest when, attracted by interior lights, they gain entry into a home or structure through openings in windows, doors, and other gaps into the home.

The pests contaminate the surfaces they touch, spreading bacteria that can result in serious illness. Proteins in smokybrown cockroach skin and saliva may also trigger asthma or allergic reactions. The pests are capable fliers and their appearance often frightens people who are not used to seeing large, flying cockroaches.

Signs of a Smokybrown Cockroach Infestation

Sightings
These insects are commonly found outdoors and can be seen primarily at night, walking in search of food. Common sighting locations include:

Droppings
Fecal material and droppings can be evident in areas that the smokybrown cockroach frequents.

Egg Capsules
Attached to a surface within a day of production, the 11 to 14 mm long, dark-brown to black egg case, or ootheca, may be observed in areas that the smokybrown cockroach frequents.

How Do I Get Rid of Smokybrown Cockroaches?

Allstate Pest Control can provide the right solution to keep smokybrown roaches in their place…out of your home, or business.

Geographic Range
The smokybrown cockroach is a common pest of the southeastern United States. Although mainly found from central Texas eastward to Florida (They are major pests in cities such as Houston and New Orleans), and as far north as North Carolina, the smokybrown cockroach also has been found as far north as Indiana and Illinois. They have also been found in Southern California.

Where Do They Live?
These large cockroaches live in areas that are warm, with high humidity and in wooded areas where they are often found in tree holes and under mulch. Outdoors, smokybrown cockroaches can be found in areas that are warm, very moist and protected from the elements. Since this insect is prone to dehydration, the availability of a moist environment is critical for its survival.

They are nocturnal and hide in small places during the day, making themselves inaccessible to humans and predators. They prefer non-dwelling areas such as greenhouses, nurseries, and gardens. Around homes and structures the smokybrown cockroach can be found:

Inside, they breed in attics, where their populations can grow unnoticed.

What Do They Eat?
Smokybrown cockroach feeding activity is most evident during the late dusk or early dawn hours when the insects leave their hiding places in search of food. It is also not uncommon to see these insects taking a drink when water is available.

While smokybrown cockroaches prefer to eat decaying plant matter, the opportunistic feeders will consume any food source available to them, such as:

Lifespan
Depending on environmental conditions, the development time for a smokybrown cockroach, from egg to adult, can vary greatly, with a range of 160 days to 716 days. As adults, a female lives an average of 218 days, and a male will live, on average, 215 days.

The lifespan of smokybrown cockroaches averages over a year, although they can live as long as 2 years or more under ideal conditions.

Eggs
Females can produce an average of 10 egg cases, or ootheca, with an average of 20 eggs per case. Each female can produce up to 32 oothecae in one lifetime. These egg cases are then attached to a protected surface within a day of production, where they will remain until the young hatch.