Latin Name
Order Scorpiones
Appearance
What do they look like? 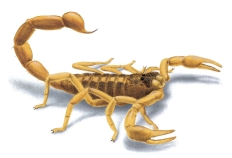 How Did I Get Scorpions?

How Do They Get in the House?
Scorpions usually become an indoor problem when they choose to leave their outdoor habitats in search of a better place to live where more food sources are found. If a scorpion’s better choice includes your home’s interior, take action to implement exclusion techniques that include sealing their common entry points with sealant or mortar.

Scorpions commonly use gaps under doors; ground-level windows; gaps surrounding plumbing pipes and utility lines that enter the home; and cracks and gaps in the foundation to get inside a home or business.

Once inside, scorpions typically seek out basements, crawl spaces, hidden places under kitchen cabinets or in garages and bathrooms.

How Serious Are Scorpions?

While scorpion stings are generally nonlethal, they are venomous nevertheless. Common side effects include numbness, pain, and localized swelling. In serious cases, vomiting and breathing trouble can occur. Children and the elderly are more likely to have severe reactions from a scorpion sting. Of the numerous scorpion species found in North America, the most medially important species is the bark scorpion.

How Do I Get Rid of Them?

When scorpions become a problem, the property owner should contact their pest management professional for advice and assistance. Your pest management professional will inspect your property, plus provide services and recommendations that will address what is needed to minimize scorpion problems. Some of the things your treatment plan may include are:

Services & Recommendations: Providing services or making recommendations for how to reduce the scorpions on your property based on your pest management professional’s inspection findings. This normally includes efforts to reduce the environmental conditions that support scorpion populations, and if needed, an insecticide application to areas where scorpions are found or where they could enter the home.

Sanitation: Removing debris from around the house where scorpions like to live. Typical scorpion habitat includes areas that provide protection such as under rocks, fallen trees, debris, stacks of firewood, potted plants, outdoor furniture and inside attics, crawl spaces and outdoor storage sheds or barns.

Lawns: Keeping the lawn mowed close to the ground and keeping landscaping plants at least 2 feet away from the house foundation.

Exclusion: Recommending exclusion measures that prevent scorpions from getting inside the home. For example, your treatment plan may identify areas under doorways and openings, torn screens and areas that surround pipes and utility lines entering the house that need to be sealed.

Chemicals: Using chemical products for scorpion treatment. Scorpions prefer to hide in well-protected places, so unless the chemical applications are targeted to their harborage sites, chemical use may not always be effective. However, your pest management professional has the knowledge and experience to know which products and where they need to be applied to treat the problem.

Signs of a Scorpion Infestation
Scorpions typically do not leave signs, other than visual sightings of themselves
Facts

Scorpion Bites
Scorpion concerns usually stem from the sting, which can contain venom, and not from an actual bite. No scorpion venom in the U.S., with one exception, is viewed as a significant medical threat to the average person. In a human victim, a scorpion’s venom may cause symptoms like swelling at the site of the sting. However, some people experience numbness and convulsions. In extreme cases, some people may experience difficulty in breathing. People who are allergic are more likely to die from a dangerous scorpion’s venom. Their chance of survival improves if they receive an injection of antivenom in time to counteract the sting’s effects.

Scorpion Habitat
Scorpions live in very dry climates. Despite this, they are very sensitive to the loss of moisture from their body and hide during the day in shady locations. They obtain most of their water from their prey. Read more about Scorpion Habitats.

The cephalothorax is made up of the head, including the carapace, the eyes, chelicerae or the mouth, the pedipalps or the claws, and four pairs of walking legs. These claws are one of the most significant parts of the scorpion, since they are used to seize prey and defend against predators.

The opisthosoma, or the abdomen, is split into two parts, namely the mesosoma and the metasoma. The mesosoma has seven parts whereas the metasoma has five.

The mesosoma, which is the abdomen’s front half, is made up of six segments. The first are the sexual organs, including a pair of vestigial and modified appendages that form a structure called the genital operculum. The second is the featherlike sensory organ called the pectines. The last four segments contain each pair of lungs. All in all, the mesosoma is shielded with tergites, a chitinous plate on the upper surface, with the sternites on the lower surface.

The other half of the abdomen, which is the metasoma, includes the tail. The tail has six segments, the last of which contains the anus and the stinger. The telson has a vesicle, which in turn has a pair of venom glands and the hypodermic aculeus, or the barb. Some scorpions are born with two tails, which is considered a genetic abnormality.

The cuticle is the tough armor that surrounds the scorpion’s body. It is covered with hairs that work as balancing organs.

Small scorpions resemble adult scorpions. As they age, they shed their exoskeletons. A young scorpion’s progress is measured by the molting stage, since it requires five to seven molts to reach maturity.

Scorpions prefer warm and relatively dry habitats. They find shelter during the day in underground holes or undersides of rocks.

Scorpions become nocturnal when they are old enough to hunt and feed. They invade predators’ homes such as birds, centipedes, lizards, mice, opossums and rats. When hunting for a prey, they use their chelae, or pincers, to either crush or inject their victims with neurotoxic venom, which actually paralyzes or kills their prey. They use small, clawlike structures that protrude from their mouths for eating. Scorpions can only take in their food in a liquid form and will dispose of any solid matter before ingestion.

A scorpion’s lifespan ranges between three and five years, but some have been known to live up to 10 to 15 years.