Latin Name
Rattus norvegicus
Appearance
What do they look like? 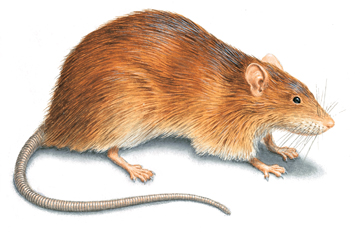 How Did I Get Norway Rats?

Norway rats will gnaw away parts of the home to enlarge a potential entryway and often burrow their way inside by digging. Older buildings with poor construction and maintenance are at a higher risk for rodent problems.

What Attracts Them?
These rats are accomplished diggers and burrowers, so they are attracted to yards with:

Norway rats get into homes by entering through gaps and crevices. Rats can fit through holes as small as 1/2 inch. Their most common entryways are:

How Serious Are Norway Rats?

Disease
Norway rats can be carriers of various diseases that can transfer to humans through rat urine and feces.

Some signs of a Norway rat infestation include:

Droppings: One of the most well-known signs of a Norway rat infestation are their droppings. These droppings are capsule-shaped and are 1.8 to 2.0 cm long. They can be found scattered along frequently traveled rodent pathways.

Gnaw Marks: Another sign of these rodents are their gnaw markings on food and objects such as utility lines.

Grease Stains: Rub marks or grease stains caused by rats running along an edge also can indicate activity. In general, the darker the stain, the greater the activity.

Visual Sightings: Sightings of these pests during the day often indicate large infestations. Outdoor sightings of burrows surrounding the building may be an indication of their nests.

How Do I Get Rid of Norway Rats?

What You Can Do
Read the following tips for keeping Norway rat infestations at bay:

Where Do They Live?
Norway rats tend to remain in hiding during the day. They are not usually seen exposed unless driven out of their hiding spaces because of limited space or disturbances.

These pests thrive in a variety of human habitats. While it is believed that they originally lived only within temperate forest regions, they are extremely adaptive and now thrive comfortably in densely populated cities.

These rats live in communities with dominant and subordinate members, though they are not truly social like ants. They make their colony as close to a water source as possible. They typically nest in underground burrows from which they enter buildings in search of food. These rats can be found living in:

Geographical Range
Sometimes called “Norway wood rats” or “Norwegian water rats,” Norway rats are prevalent throughout North America. Arriving on ships from Great Britain circa 1775, these rodents quickly spread throughout the American Midwest. By the 1800s, they were present as far as Ontario, Canada.

What Do They Eat?
Norway rats are omnivorous and feed on a variety of food sources. They are capable of catching small fish and rodents. These pests tend to feed on:

Reproduction & Lifespan
Norway rats reach sexual maturity in 2 to 5 months and can breed any month of the year. Females can have three to 12 litters per year and litters may number from 4 to 22. Adults generally live up to one year in the wild.