Latin Name
Lasius spp.
Appearance
What do they look like? 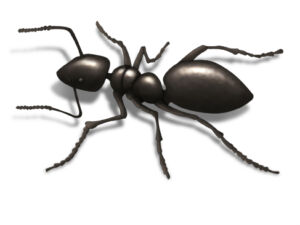 Length: Workers are 4 to 4.5 mm long
Color: yellow in color
When crushed, they produce a lemon scent that is often described as citronella.

How Did I Get Moisture Ants?
These ants thrive in damp environments and are attracted to wood that is decayed or damaged by moisture. Wood near bathtubs and areas damaged by water from plumbing leaks are popular nesting sites. Homes with outdoor access to attics and crawl spaces are at risk for infestations since moisture ant swarmers and workers may also enter through open doors or windows searching for sweets and a suitable moist habitat.
How Serious Are Moisture Ants?

Moisture ants generally speed up the normal decaying process of wood, but other than that, these ants are harmless, but often mistakenly thought to be wood destructive ants. One thing about these ants that can be useful to a homeowner is their activity provides an indication of wood decay where they are active, and signals a problem that needs to be addressed. In their winged swarmer form, moisture ants somewhat resemble termites, so always make sure to contact your Orkin termite specialist for an accurate identification. Their tendency to nest in wood mimics the behavior of carpenter ants.

How Can You Get Rid of Them?

Keeping ants out of homes and buildings is an ongoing process, not a one-time treatment. Orkin’s exclusive A.I.M. solution is a continuing cycle of three critical steps — Assess, Implement and Monitor.

Signs of a Bigheaded Ant Infestation
The most obvious signs are the yellow workers or the swarmers.
Behavior, Diet & Habits

Moisture ants get their name from their habit of nesting in high-moisture areas. Some people call them yellow ants because the workers are yellowish in color. There are several species in the United States. One of the largest species is Lasius interjectus (Mayr), also known as the citronella ant.

Range
Moisture ants are common from the Pacific Northwest to New England. Their range extends southward to Florida and Mexico.

Where do they nest?
Outdoors, they often nest under rocks or logs. They sometimes nest above the ground in rotting logs. Moisture ants feed on honeydew. The workers get honeydew from aphids and scale insects that feed on plant roots. Moisture ants often tend aphids to collect the honeydew that they produce. Some moisture ant colonies make their nests against the foundation of homes. When colonies are under slabs, the ants often push soil up through cracks in the concrete while they are digging galleries underneath. When this soil appears in basement floors, it can cause distress for the homeowners. Many people mistake this soil for a sign of termite activity.

Prefer moisture damage
When moisture ants move indoors, they often nest in wood that is moisture damaged. They frequently find damaged wood in areas like bath traps. They sometimes nest inside walls where there is a plumbing leak. There have been cases of these ants nesting in damp soil in crawlspaces. In these situations, the workers made mounds of excavated soil in the crawl space.

If the ants have nested in damp or damaged wood, correcting the moisture problem and replacing the wood will be a priority. In damp or humid areas, treated wood may be a good replacement.

Do Moisture Ants Fly?
Moisture ant is a common name that most frequently includes ants in the genus Lasius. The only members of a moisture ant colony that fly are the female and males who participate in mating swarms.

Reproduction
Each colony has a single queen that generates the colony’s members. Mating occurs when winged males and females, called swarmers, swarm from the colony in the summer. Mated females go on to found new colonies.
Swarmers
If winged ants have swarmed inside the home, remove them with a vacuum cleaner. Empty the vacuum bag promptly and take it outside to the trash. It is sometimes hard to tell whether winged insects are ants or termites. Call the local pest control professional for an inspection and identification.
CALL NOW
AllEscort