Latin Name
Tapinoma melanocephalum
Appearance
What do they look like? 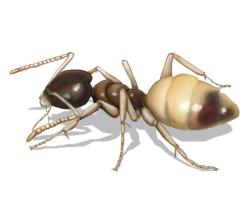 The ghost ant (Tapinoma melanocephalum) gets its name from its size and pale color of its legs and abdomen, which make it difficult to see. These ants have dark heads and thoraxes. The workers are about 1.3 to 1.5 mm long.

How Did I Get Ghost Ants?
Ghost ants are extremely small and can get into houses through openings around doors and windows, as well as cracks in foundations, plus these ants are sometimes accidentally brought inside on infested plants. Once inside, they feed on sweets like sugar, cereal, and syrup. Ghost ants often appear on kitchen or bathroom counters and sinks. These intrepid pests also build nests indoors and out, even in wall voids or spaces between kitchen cabinets.
How Serious Are Ghost Ants?

Ghost ants usually have multiple nesting sites, as new queens leave their original nests and create their own colonies. The pests build nests in various places, even frequently disturbed areas like potted plants or the spaces between books on a shelf. Ghost ants are serious pests in greenhouses, so always inspect any plants you purchase to ensure they are not infested with ghost ants – and be sure to look carefully since their tiny size enables them to hide and not easily noticed.

Finding and removing ghost ant colonies is tough because there can be so many different nests in odd places. Any type of food crumbs or spills attract the pests, and they contaminate whatever food products they invade. Ghost ants do not sting and rarely bite, but their presence and abundance inside will create a serious nuisance and potential property damage issue.

How Do I Get Rid of Them?
Controlling ghost ants requires time and patience. Because there can be multiple nesting sites, these ants are usually best left to a pest control professional. The Allstate Pest Control Man™ is trained to help manage Ghost Ants and similar pests. Since every building or home is different, your Allstate Pest Control technician will design a unique program for your situation. Keeping ants out of homes and buildings is an ongoing process, not a one-time treatment. Allstate Pest Control ’s exclusive A.I.M. solution is a continuing cycle of three critical steps — Assess, Implement and Monitor. The Allstate Pest Control Man™ can provide the right solution to keep ants in their place…out of your home, or business.
Signs of a Ghost Ant Infestation
Sightings of small ghost ant workers is the usual sign of their presence.
Behavior, Diet & Habits

Ghost ants are tropical ants that have been in south and central Florida for several years. They are easily transported in boxes, crates, potted plants and even in household goods that are being shipped. In northern states, these ants have been known to survive only in heated buildings and greenhouses.

What do they eat?
These ants eat honeydew that they collect from plant-feeding insects. They often tend aphids to collect the honeydew. The workers also gather insects to feed the colony. When they are indoors, ghost ants usually prefer sweets.

Where do they live?
Outdoors, ghost ants make their nest in the ground. They often nest beside stones, logs and firewood piles. They enter buildings on trails that they make along the ground. They also enter houses by trailing on utility lines or by following limbs of trees and shrubs that touch the house.

When ghost ants make nests indoors, it is usually in flowerpots, behind baseboards and inside wall voids. The colony may split into several nests. It is normal to find ghost ants trailing between multiple nesting sites.

Do Ghost Ants Bite?
Ghost ants (Tapinoma melanocephalum) do not sting and usually do not bite unless their nest is threatened. Most incidents of ghost ant bites result in little discomfort and little or no evidence of a reaction to the bite. The ghost ant can become a serious household pest because it will build nests both inside and outside homes. This ant is a sweets eater, but also feeds on greasy foods and insects. Since this ant is often closely associated with the homeowner’s kitchen and bathroom, their most important impact may be the transfer of disease organisms.

Reproduction
Queens produce eggs which, in turn, develop into the other colony members through complete metamorphosis. New colonies often are formed through a process known as budding. Budding involves a queen and a contingent of workers separating from the main colony to form a new colony elsewhere. This can happen multiple times, depending on the number of queens.
Prevention Tips

A thorough inspection is the first step in preventing ghost ant problems.