Latin Name
Psychodidae
Appearance
What do they look like? 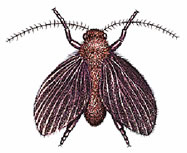 Appendages: These flies have six legs and a pair of wings and antennae.
Body: Light gray or tan body and lighter-colored wings. The body and the wings are covered with long hairs, giving the fly a fuzzy appearance.
Characteristics: When at rest, the drain fly folds its wings over the body in a characteristic roof-like manner.
Size: Drain flies measure about 1.5 to 5 mm long.
Larvae: Drain fly larvae are not longer than 4 to 10 mm when fully mature and they are slender with a dark strip on the “back” or dorsal area. Larvae do not have eyes, and they are legless. On one end of the larva, there is a dark breathing tube used to extend out of the film to obtain air.

How Did I Get Drain Flies?

If these flies are present in the house there is almost certainly a slow or clogged drain. Drain flies gather, mate, and lay eggs in moisture or standing water. The slimy film that forms in sewers and drains is a favorite breeding spot. Putting off regular cleaning and maintenance of these areas may attract the pests and offer them a place to feed and develop.

Entry
These pests are particularly likely to be found in bathrooms and kitchens, typically getting into homes through:

How Serious Are Drain Flies?

These pests are a nuisance because they infest in large numbers. Once inside, drain flies may plug pipes and spread bacteria from the filth they live in, possibly contaminating food in the process. These pests, even though they live in filth, are not known to spread any disease to humans.

Signs of a Drain Fly Infestation
As with most flies, the most noticeable sign of drain flies are the adults. They typically are seen resting on the walls in bathrooms or near the breeding materials. Larvae also may be observed wriggling in the breeding material.
How Do I Get Rid of Drain Flies?

Generally, the best control for these flies is to remove the breeding site, which is the organic material that collected in the drain. The site must be located and cleaned. Drain cleaner will not fix the situation.

Once the material is removed (along with the larvae) the problem is solved, except for the adult flies. They will live about 20 days, but will have no place to lay eggs to continue their life cycles.

Where Do They Live?
Drain flies are common in moist areas coated with nutrient-laden organic material. As their name implies, they are found in house and storm drains. They can also be found near decaying logs and compost piles.

What Do They Eat?
Drain flies feed on organic matter and sewage.

Eggs are laid in irregular masses almost anywhere decomposing organic materials are found. Drain fly eggs hatch into white, nearly translucent larvae. These larvae have been known to survive dramatic temperature swings and low oxygen levels. Under favorable conditions, the flies can go through one generation in as little as one week. Two to three weeks is more typical.

Larvae
Usually, the homeowner never sees drain fly larvae since the larvae are located in the gelatinous film inside drains. However, sometimes, when drains are taken apart, larvae can be found in the film. In small numbers, larvae are considered beneficial because they break down materials that cause drain clogs. They have extremely strong jaws and are capable of cutting through layers of dense slime and build-up.

Adults
After the larvae mature, they will pupate or rest until they emergence as adults. The adult is the only life stage usually observed. Adult drain flies usually live about two weeks, but newly emerged adults rapidly replace them. These flies are also known as moth flies due to their appearance: they are small and furry with large, ovoid wings and prominent antennae